Has the Use-by Date for Brown v. Board of Education Expired? 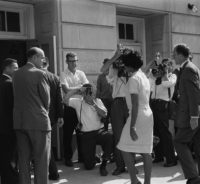 I was fourteen years old in the spring of 1954 when the Supreme Court held 9-0 that the racial segregation of students in public schools violates the equal protection clause of the Fourteenth amendment. But it was in September of 1957 as soldiers from the 101st Airborne escorted nine African American students through a jeering crowd into Little Rock High that I began to understand the significance of the court decision.

Later as a career public school educator serving in many roles, I came to know that access and opportunity are the keys to quality education for all students and, as such, require constant focused vigilance. Today alarm bells go off in my head when a federal court appointee ducks a commitment to Brown in her Senate confirmation hearings and the administration’s education cabinet official promotes charter schools over public ones.

Brown v. Topeka Board of Education overturned the “separate but equal” doctrine justified in Plessy v. Ferguson, which held that as long as separate facilities were equal they did not violate the Fourteenth amendment. Brown held that separate but equal had no place in public education and that, in fact, “separate is inherently unequal.” The decade and a half that followed Brown was pretty heady as Jim Crow was challenged throughout the South; the Civil Rights Act and the Voting Rights Act were passed; and important education legislation, including the Elementary and Secondary Education Act (ESEA) and the National Defense Education Act (NDEA), put federal funding behind the improvement of teacher education and the subject matter taught in the curriculum.

Brown was never a cure-all, and as some would argue, may have created its own set of problems, such as the implementation known as Brown II that led to the unpopular policy of busing children around large school districts but failed to address the de facto segregation of suburban communities. Today the disparity between the performance of predominantly African and Mexican American urban schools and predominantly White suburban schools remains the core educational issue of public education in the United States.

Imperfect though it may be, Brown set in motion the belief that it is every individual’s right to access a free and equal public education and it is the aspiration that we must all keep in our sights. The historian Waldo Martin (1998) says it well:

“(Brown) embodies the best of our hopes and ideals. It resonates with our best selves and our highest and most honorable callings. It springs from our bedrock national commitment to freedom, justice and equality. In a sense, Brown is a metaphor for the American dream.”

Other education policies and research-based practices have broadened the scope of Brown. In my career in California, I worked to implement the requirements of Lau v. Nichols, the court decision that said that English learners are entitled to adequate support in their primary language in order to access the core curriculum, while also acquiring English. I experienced the impact of the passage of the American with Disabilities Act (ADA) that introduced the concept of “least restrictive environment” as a right for students with disabilities. An outgrowth of Brown, the ADA brought students with learning disabilities into mainstream classrooms and out of portables on the back lots to the greatest degree possible by establishing their right to succeed in the core curriculum and setting quality standards for inclusion.

Other legislation and court rulings continued and expanded the intent of Brown. For example, Title Nine and Affirmative Action policies aim for equality of opportunity in sports and higher education that is not limited by gender, ethnicity, disability, or primary language, as well as by race. Recent efforts to create equal access for transgender students to use restrooms in schools and other public facilities is an outgrowth of the ongoing crusade, launched by Brown, for all Americans to access a free public education.

It may be that the Civil Rights Act of 1964 negated the legal need for Brown, as some have said. However, having watched the scaffolding of student learning rights rise on the foundation of Brown, I cannot agree that Brown has outlived its usefulness. I am concerned, as I think all educators and parents should be, about a judge or court or elected or appointed official who dismisses this precedent-setting decision. Further, it behooves us all, whether educators, students, parents, or taxpayers, to consider how we uphold the principles of Brown and improve our public schools so that equal access to a free public education becomes equal access to the very best education.